skip to main | skip to sidebar

A committed approach to TAFL 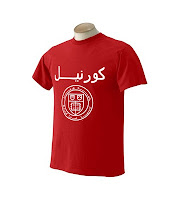 I don't think this blog has many English-only speaking followers, neither do I expect their number to increase because of this post, really, but since I slightly touched upon the subject of Munther Younes' integrated approach in my previous one, and I intend to keep up with it here, I decided to switch to English for the sake of those overseas, if any, who might be interested to know what a Spanish teacher of Arabic has to say about Younes' approach, which is not only the trendiest, but the soundest I know or can think of, by far, even if Younes himself seems to be the only one who has ever put it to practice. As Elizabeth Redden reports for Inside Higher Ed (01.10.2008):


Younes says he generally agrees with the assessment that integration is becoming more common in Arabic classrooms. But he also says he doesn't know of anyone else that's doing it like Cornell does. Among faculty interested in the approach, many, he says, "feel that they really cannot go all the way yet."

This might be my case, for much as I like Younes' approach, I have my doubts as to whether my non-native language skills would ever allow me to "go all the way" in any Arabic dialect whatsoever, even if in this respect, and in all modesty, I can hardly be branded as not being at home with the language (actually, I literally am). That is one of the reasons why I make do with what I call part of a committed approach, which is somehow not only broader than that of Younes, but could even contain it, like any other approach thoroughly committed to responding to students' (not faculty's) motivations and goals. At the top of this bundle we can find Younes' integrated approach and somewhere in the middle would be mine, which is not very far from that, for example, of Uri Horesh: teaching "the standard variety alongside squirts of dialectal forms, which eventually grow and form an inherent part of our discourse in the language". What I try to do, to put it simply, is to keep the other side of the coin within sight as much as possible, while sticking to normative Arabic as the core of the syllabus. This, of course, may not be the best way to deal with Arabic diglossia in the classroom (while Younes' certainly is, I guess), yet it seems to be the only one left under certain circumstances, which may range from a lack of sufficient fluency (or self-confidence) to the fact of teaching in a program where few colleagues are willing or able to integrate the two varieties—half a semester's exposure to non-communicative, hyper-normative Arabic teaching is enough for most of your former students to forget whatever you told them about pausal forms and vowel neutralization, for example, not to mention the confusion it creates among them, taught, as they have previously been, in a rather more pragmatic manner. In fact, the more I enjoy hearing those of my students who have taken Moroccan Arabic slip into it when expected to be speaking Standard Arabic, the more I fear they could be chided, or simply underrated, for this very same thing by some old-fashioned colleague.

In other words, Younes' integrated approach requires not only a personal commitment (as mine does), but also an institutional one, i.e., a wholly integrated program. Fortunately enough, starting from this year and owing to the reform process leading to the European Higher Education Area, Spanish departments of Arabic and Islamic Studies (which is their official name) are free to design either their own programs or their own course syllabi (in case they take part in others' programs), yet I don't know of any that plans to give Younes' approach a try, or even considers teaching a dialect of its choice on an equal footing with normative Arabic. Furthermore, should any department decide to adopt this approach, it would still have to overcome a major obstacle: here in Spain, candidates for Arabic teaching positions in public universities (50 out of the 77 existing in the country, and as far as I know the only ones offering Arabic on a regular basis) can in no way be required by the recruitment committee to prove they speak the language with a modicum of fluency, let alone require native or near-native proficiency. So, anyone desiring to establish an integrated program should keep his or her fingers crossed and pray that the best qualified candidates in terms of academic record will be also the best in terms of language proficiency and teaching ability—cases arising from time to time, but still too rare to justify any optimism in this regard. I guess these are what David Wilmsen calls "administrative realities". As such, however, they are but a reflection of deeper realities.

As long as these realities remain unchallenged, Arabic teaching in Spain (and most probably elsewhere) will remain much the same as today. Steps can be taken on a personal level to break the deadlock, and these I have called a committed approach, but no significant progress can be expected in a short to medium term unless the profession readily and openly admits that there is much more to address than diglossia, sequencing of exposure, study abroad or teaching materials; lest we preach to our students and we ourselves be castaways.